On the 9th of August, the UN’s Intergovernmental Panel on Climate Change’s (IPCC) released the most comprehensive climate report for almost a decade, which revealed that we can navigate a narrow path and avoid climate catastrophe, but only through immediate and deep cuts to our greenhouse gas emissions. The report stated that climate change is widespread, is intensifying at great speed and is predominantly man-made. Overall, the report put into words what people around the globe are already experiencing: Changing weather patterns, more climate catastrophes, destruction of nature and human suffering. The report, which has been drawn out by one of the most respected climate monitoring bodies in the world, stated that “the planet is warming at a rate not seen in 2,000 years, atmospheric levels of carbon dioxide are at their highest in 2 million years; the shift in the climate is leading to increasingly erratic and extreme weather events, and human activity is without a doubt responsible for (almost) all of it. It delivers “a code red for humanity”

Key Takeaways from the report:

1. Changing weather patterns caused by our heating world will continue to cause increasingly extreme weather events.

3. The past five years have been the hottest on record since 1850

5. Human influence is ‘very likely (90%) the main driver of the global retreat of glaciers since the 1990s and the decrease in Arctic sea-ice

Sources: The Guardian and IPCC

Nearly 300,000 tons of rubbish cover the ocean’s surface alone, and that’s not counting any of the rubbish that has sunk to the bottom of the ocean! Boats like The Ocean Clean Up are designed to catch plastic, mostly before it flows into the ocean. Boyan Slat, a 24-year-old entrepreneur, founded The Ocean Clean Up in 2013 as a nonprofit foundation in The Netherlands. Since then, it’s received about $40 million in donations, according to Slat, and about $7 million of that’s been spent on building a trash collection system called System 001. All in all, the Ocean Cleanup wants to launch 60 of these floating plastic tubes to trap marine plastics.

They are completely solar-powered and work around the clock, capable of collecting up to 100 tons of trash a day! You can spot the The Ocean Clean Up boats across the globe from Europe to the Caribbean. It’s a super sustainable way to close the tap on the greatest source of plastic that enters our oceans! Self-sustaining boats show that there’s really no limit to what we can do by shifting away from fossil fuels. 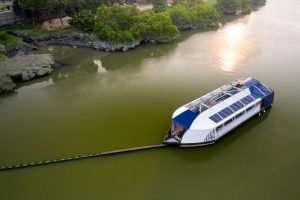 A peatland restoration project near Manchester will help soak up carbon, boost biodiversity and prevent flooding. Correspondingly, the project may already have an impact where flooding is concerned: when Storm Christoph hit the UK earlier this year, the flood-prone communities at the foot of the moor were expected to be inundated. But the waters never came.

Over the last six months, conservationists have sculpted 3,500 scallop-shaped bunds — or dams — into peatland at Holcombe Moor in the West Pennines. The banks were created to trap water and rewet the peat, which has dried out as a result of pollution, overgrazing and moorland fires. Healthy peatlands are also hotbeds of biodiversity, attracting plants, insects and rare wading birds, such as the golden plover and dunlin. The UK government has pledged to restore 35,000 hectares of peatland by the end of the current parliament

In early August, Easy Jet launched its new range of recycled uniforms, made from repurposed plastic bottles. The announcement follows the multinational group’s wider move to tackle its supply chain impacts, with the company removing 27 million pieces of plastic from its operations within the 2020 financial year. The new uniforms are made from 45% plastic bottles and reportedly have a 75% lower carbon footprint than traditional polyester. By the same token, it is estimated the renewable uniforms will save around 500,000 plastic bottles from going to landfills every year.

As part of its wider efforts to reduce its carbon footprint, the airline giant offers a reduction on drinks to passengers who bring their own cup and has also introduced a biobased teabag holder. The company was also the first major airline to introduce carbon neutral flights in 2019, and it has been a vocal supporter of electrifying the industry where possible, with word that the firm is already collaborating with Wright Electric and Airbus to develop zero-emission aircraft for commercial flights.

Animals you didn’t know were at risk of extinction

Eco News Round Up January 2022