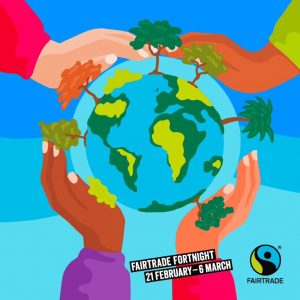 This year’s Fairtrade Fortnight is from Monday 21st February to Sunday 6th March. This two-week event provides an opportunity for individuals, companies, and organizations to celebrate farmers and food producers from around the world, as well as encourage the general public to help them with their efforts. The focus for this year’s Fairtrade Fortnight is Climate Change. In light of the UN Climate Change Conference (COP26) held last year in Glasgow, Fairtrade members and campaigners wanted to reiterate and stress the fact that climate change is one of the biggest challenges facing international agriculture and farming. For instance, droughts and floods have led to crop failure and shrinking harvests, which has meant lower food output and income for farmers. During the Fortnight, Fairtrade challenges everyone to try and swap their shopping, purchasing Fairtrade products instead where they can.

England’s farmers to be paid to rewild land

It has been announced that farmers in England will be given taxpayers’ money to rewild their land, under plans for large-scale nature recovery projects announced by the government. These will lead to many arches of land being newly managed to conserve species, provide habitats for wildlife and restore health to rivers and streams. The project will cover 10,000 hectares in the first two-year phase. It will involve full rewilding or other forms of management that focus on species recovery and wildlife habitats. Moreover, rare fauna such as sand lizards, water voles and curlews will be targeted, to improve the status of the most threatened species in England. The total amount available for such schemes is expected to reach £700m to £800m a year by 2028. By 2042, the government aims to have up to 300,000 hectares of England covered by such “landscape recovery” projects – an area roughly the size of Lancashire.

Millions of trees are being planted beside Scotland’s remotest rivers and streams to protect wild salmon from the worst effects of climate heating. Furthermore, fisheries have planted 250,000 saplings along key tributaries of the River Dee and plan to plant a million by 2035. The dramatic decline in wild salmon numbers is evident due to a myriad of factors including climate change affecting food availability; weirs and other obstructions in rivers; predation by increasing seal populations and sea lice attracted by fish farms. Additionally, fisheries scientists have found rivers and burns in the Highlands and uplands are already too warm in summer for wild Atlantic salmon maximizing the threat to the species’ survival.

The iconic Entertainer, philanthropist and Businesswoman Rihanna has pledged $15 million to address climate change benefiting 18 climate justice organizations. These groups include the Indigenous Environmental Network, Movement for Black Lives and Climate Justice Alliance. Rihanna is originally from Barbados, which is an island highly vulnerable to climate change. The funds will come through Rihanna’s Clara Lionel Foundation. Founded in 2012, the foundation is named for her grandparents, Clara and Lionel Braithwaite. The foundation focuses on climate change, justice for marginalized people, refugee crisis response and the global fight against COVID-19.

Italy Makes Protecting the Environment Part of its Constitution

Italian parliament approved a law recently making protection of the environment part of the Constitution in a vote politicians and activists. The law now says that the state must safeguard the environment, biodiversity and ecosystem in the interest of future generations. In addition to this, the new Italian law states that any private economic initiative must not damage health or the environment. This new law comes after Rome moves to raise green investments to transform the economy under the European Union’s post-coronavirus pandemic recovery fund. This is a very important step towards climate action that all countries ought to follow.