The newest product from the LEGO Group uses PET plastic from old plastic bottles. This is the first LEGO brick made from a recycled material to meet the company’s quality and safety standards required to put them to market. By 2030, the company aims to make all their bricks from recycled or renewable materials that can also be fully recycled. This would be a huge win for a business that makes around 100 million bricks every day. The group has put into place various sustainability goals and process in order to be as environmental-friendly as possible.  Last year the group became members of the Ellen MacArthur circular economy network and its ambition for all packaging to be made from renewable or recycled materials, as well as being recyclable themselves, by 2025. 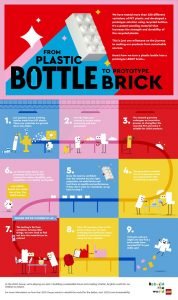 Corona beer has launched the world’s first-ever ‘plastic fishing’ tournament where they pay fishers in Mexico to retrieve plastic waste from the ocean. During the event, 80 fishermen competed in the event to collectively pull out over three tons of plastic from Mexico’s oceans. The winner of the tournament pulled in nearly 815 pounds of plastic the day of the contest, earning $14,800 pesos, the equivalent of a month of wages from fishing at the usual rates in the area.The other contestants, however, didn’t go away empty-handed. Corona hooked them up with the country’s largest recycling company, Mexico Recicla, who compensated them for their catches at rates higher than those they would be paid for fish. What an innovative and community-building project to fight plastic pollution in our oceans!

Grocery store on wheels in London for “zero waste” shopping

Ella Shone’s small electric truck used to deliver milk is now used to drive around London, selling groceries and household goods that are free of plastic packaging. The 32-year-old bought her “top-up truck” last year after the first coronavirus lockdown got her thinking about innovative ways to reduce waste. She has found plenty of demand for her service, with customers scooping up dry groceries such as lentils or filling bottles from large dispensers of vinegar or washing detergent. On a rainy day in May, the 32-year-old plied a route to eight stops in the up-and-coming district of Hackney in northeast London. The mobile shop was created to bring “packaging-free” shopping to people’s doors, tapping into a growing demand for deliveries during the stay-at-home restrictions.

The ban came into force last week & includes straws, plastic bottles, takeaway containers and coffee cups made from certain materials. The European Union’s executive arm targeted the products that are most often found on the continent’s beaches and seas, which together account for 70 percent of its marine litter. The proposed rules are tailored for the different products. For instance, single-use plastic products with readily available alternatives will be banned from the market. That applies to plastic cotton buds, cutlery, plates, straws, drink stirrers and sticks for balloons—all will have to be made from more sustainable materials. These new measures, if implemented, would prevent 3.4 million tonnes of carbon emissions and avoid €22 billion in environmental damages by 2030 and save consumers a projected €6.5 billion, the commission estimated. 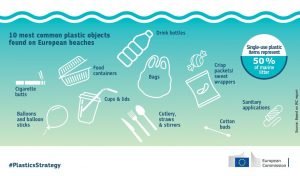 A research team has found a way to make biodegradable plastics completely disappear, unlike ones that only claim to break down. While biodegradable plastics have been named as a solution to plastic pollution, in practice they don’t work as advertised. “Biodegradability does not equal compostability,” said Ting Xu, study coauthor and UC Berkeley polymer scientist.  Since the 1950s, only 600 million metric tons of plastic have been recycled, compared to the 4.9 billion metric tons in landfills or polluting the planet. A research team at the U.S. Department of Energy’s Lawrence Berkeley National Laboratory (Berkeley Lab) and the University of California (UC), Berkeley has found a way to make biodegradable plastics that actually disappear. Truly game-changing for the plastic pollution problem.

We hope you found this article useful, stay tuned for our next upcoming eco news update in September.